When a city contains people of different races, segregation often occurs: sizeable parts of town largely inhabited by people of one race. But when asked what sort of neighbourhood they would like to live in, people often report a preference for mixed neighbourhoods. So why does the reality often fail to reflect this desire?

Of course, there are various conceivable explanations. One comes from what economists call revealed preferences, meaning that, when push comes to shove, people may not be quite so keen on mixed neighbourhoods as they thought they were. But there are other, more interesting possibilities. With some friends I’ve recently being doing some mathematical work which is relevant to this question, and which allows us to take people at their word. The interesting thing is: high levels of segregation can emerge even in a city where everyone would be completely happy in a mixed neighbourhood.

It also produces some rather lovely pictures: 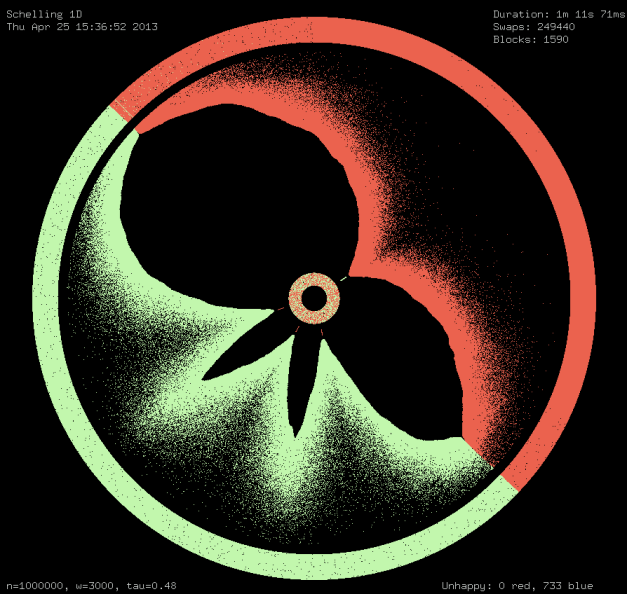 In the next post I’ll explain what this picture means and discuss our work in more detail. (Impatient? The preprint is here.) This post is background, and the starting point is a theoretical model of racial segregation devised by Thomas Schelling in 1969. It’s a simple model of a city, in which people may move houses depending on whether or not they are satisfied with the make-up of their current neighbourhoods.

Schelling is best known for his infamous work on game theory at the RAND Corporation during the Cold War. His book on that subject, Strategies of Conflict, is a very readable introduction to these ideas (so long as you don’t mind a little maths), and is accurately summarised by Cousin It as follows:

”Forget rationalist Judo: this is rationalist eye-gouging, rationalist gang warfare, rationalist nuclear deterrence. Techniques that let you win, but you don’t want to look in the mirror afterward.” 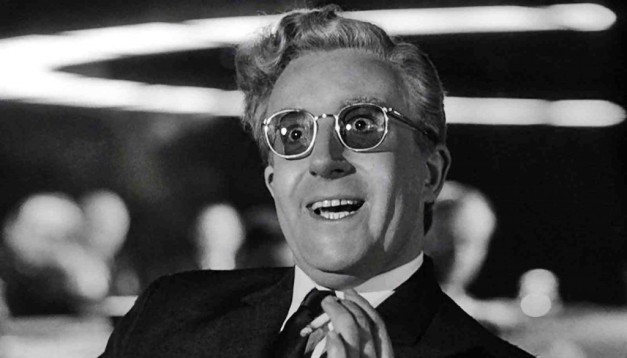 Schelling also played an interesting role in the genesis of Stanley Kubrick’s film on this very subject: Dr Strangelove (Or: How I Learned To Stop Worrying And Love The Bomb).

In 2005, Schelling was awarded the Nobel Memorial prize in Economics in 2005 (though not without some controversy). The Academy commented on both his work on strategy and – my focus here – his insights into questions related to racial segregation.

I’ll describe his model in the next post, but as you will see it is very simple indeed. Now, you can view this either as a good or a bad thing. For a mathematician – that’s me – it’s good, since it provides the possibility of a thorough analysis of the mechanisms at work. On the other hand, for a social scientist, it does carry the undeniable disadvantage that the model is a pretty feeble reflection of reality.

So let’s admit from the outset that Schelling’s model town is by no means realistic: it ignores obviously relevant factors such as geography, local amenities, transport, and, well, pretty much anything else you can think of that real people actually care about when choosing where to live. On top of this, it pretends that people live in a beautifully convenient geometrical arrangement, which in reality happens only occasionally.

There have been numerous subsequent modifications of the model to make it more realistic, and therefore presumably more useful to social scientists, for instance by incorporating factors such as house prices. Even so, I hold that Schelling’s original simple model carries a rather profound lesson for us all, not about racial segregation particularly, but more generally about the relationship between the actions of individuals and the larger scale social structures to which they can give rise.

This relationship can be extremely counterintuitive, as discussed in Schelling’s – again very readable and less technical – book on this theme: Micromotives and Macrobehaviour. As he says

In particular, in the next post I’ll discuss the surprising finding that when people are more tolerant of neighbours of different races, this may actually lead to greater segregation.