[Disclaimer: this is not a sponsored post or advert – it is a product purely of my own enthusiasm. But in the interests of full transparency, let me say one thing: for reasons you may come to understand, I developed a deep desire for some Magformers octagons. Although these exist, they are like gold-dust. So I wrote to Magformers UK and asked whether they might sell me six octagons as a special deal, and they very generously replied that they would give me six octagons, which indeed they did,  for which I am eternally grateful, and which you can spot in some of the photos below. They feature more prominently in the follow-up post which is [update] here.]

The Platonic solids: the tetrahedron, cube, octahedron, dodecahedron, and icosahedron.

When some kind soul gave my children a set of Magformers – a magnetic construction toy mainly comprising regular polygons – needless to say the first thing I did was steal them for myself and set about building up the collection until I could create the five Platonic solids.

The next shapes to move on to are the Archimedean solids. There are 13, of which 10 are realistically buildable (the truncated dodecahedron and truncated icosidodecahedron require decagons which Magformers don’t (yet?) make, and the snub dodecahedron requires unfeasibly many triangles (80) and would in any case collapse under its own weight). Here’s a sample of three:

Whenever we think of the Archimedean solids, we mustn’t forget (explanation below) to mention in the same breath the prisms. There are infinitely many of these, of which five are magformable (although one, eagle-eyed readers will notice, we have met already under a different name):

There is also the infinite family of antiprisms of which we can make six (two may look familiar):

What to do next next? In our enthusiasm for polyhedra, let’s not overlook 2-dimensional structures. There are three regular tessellations:

…and eight semi-regular tessellations, of which six are magformable (the other two this time require dodecagons [corrected, see comments]). For example: 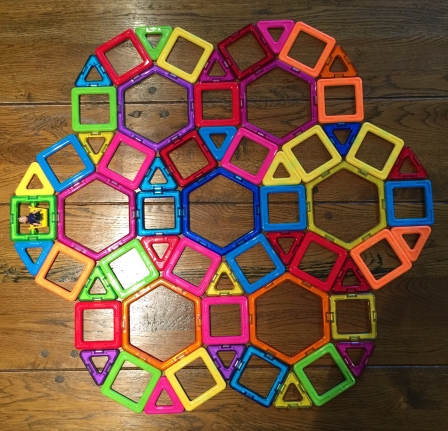 Tessellations are not limited to 2-dimensions though. Of the shapes discussed so far, the space-filling polyhedra (i.e. ones which can tessellate single-handedly) are: one Platonic solid (the cube), two other prisms (triangular and hexagonal), and one of the Archimedean solids (the truncated octahedron). 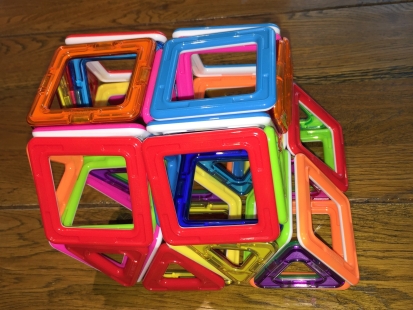 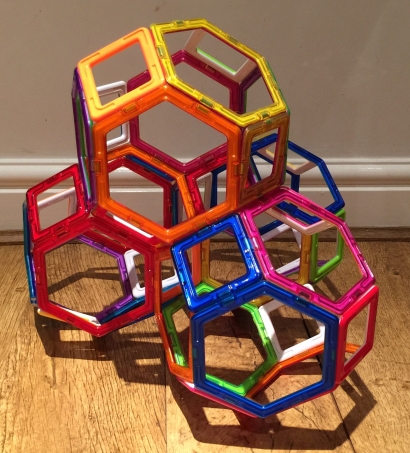 Beyond these there are 23 other convex uniform honeycombs, in which combinations of Platonic, Archimedean, and prismatic solids together fill space. In principle, all are magformable! So this a rich seam for further exploration, although you do start to need serious numbers of pieces to get anywhere. A couple of examples: 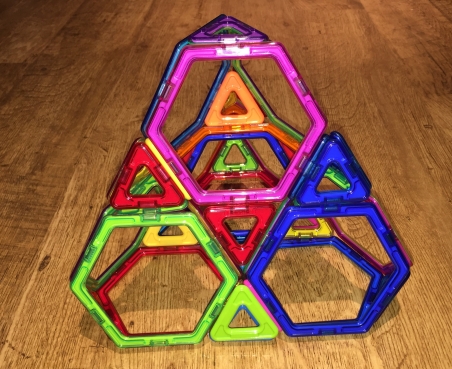 Tetrahedra and truncated tetrahedra in the quarter cubic honeycomb.

Before moving on to the topic in this blogpost’s title, let’s step back. All the shapes we have met so far are characterised by two things: symmetry and convexity. Firstly, all their faces are highly symmetrical: only equilateral triangles, squares, regular pentagons, hexagons, or octagons are used, that is to say regular polygons. (Magformers do offer some less regular pieces – rhombuses, isosceles triangles, etc. – but I shan’t be using any.) But the Platonic solids exhibit global symmetry as well. Every face is identical to every other, in form, but also in how it relates to the rest (face-transitivity). More subtly, every corner is identical to every other (vertex-transitivity). Obviously, the Archimedean solids, having faces of more than one shape, cannot be face-transitive, but they are vertex-transitive. Indeed this is their defining property. To coin one more piece of jargon, a solid is uniform if it is vertex-transitive and built entirely from regular polygons.

The geometrical theorem we have danced around is that the Platonic and Archimedean solids, the prisms, and the antiprisms are the only polyhedra which are both uniform and convex.

…which brings us to convexity. Roughly, this means that the shape doesn’t have any holes or dents, or any bits sticking out too far. More precisely, a shape is convex if whenever you take two points on different faces and connect them with an imaginary straight line, that line lies entirely inside the shape. If you can find two points whose line passes through fresh air on its way between them, the shape is non-convex. 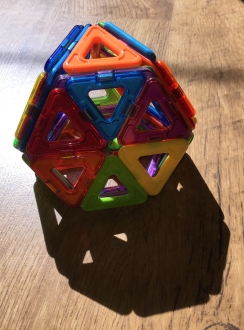 A convex, non-strictly-convex polyhedron: a truncated tetrahedron tiled with triangles.

A detail: the requirement that the imaginary line lies inside the shape rather than on the surface, separates polyhedra which are strictly convex  from those which are merely convex, where adjacent faces may lie flat.

In 1966, Norman Johnson posed a question: forgetting about global symmetry (i.e. face or vertex transitivity), what strictly convex polyhedra can be built from regular polygons? He came up with a list of 92 (on top, of course, of the uniform solids just discussed). In 1969, Victor Zalgaller proved that this list of 92 Johnson solids was indeed complete.

By my reckoning, 74 are magformable, with the need for decagons again the impediment to the rest. (I hope my new friends at Magformers will take two things from this post: the benefits of making octagons more widely available, and the urgent need to start creating decagons!) Let’s see some examples. The simplest Johnson solids are the pyramids (notice an old friend sneaking in amongst the newcomers:

These already illustrate a theme, which is that many of the Johnson solids are obtained by fiddling with uniform solids: the triangular pyramid is a tetrahedron (and thus not one of the 92), the square pyramid is half an octahedron, and the pentagonal pyramid is the hat of an icosahedron.

Gluing matching pairs of pyramids together gets you the bipyramids (no surprises to see a familiar figure this time):

The bipyramids (that is to say the triangular and pentagonal ones, not the Platonic interloper) are interesting for another reason: they are face-transitive. Every face of the pentagonal bipyramid (say) is identical not just in shape but in function to every other. But it is not vertex transitive: the corner at the top is qualitatively different from those around the equator, in that five faces meet at the top, but only four at each equator corner. (So it’s no injustice that the pentagonal bipyramid is omitted from the  list of Platonic solids.)

Several of the Johnson solids are derived by either chopping bits off (diminishing) or adding bits on to (augmenting) uniform solids. E.g….

As another illustration of the sort of cutting and gluing you can do, the hat of a rhombicuboctahedron (one of the Archimedean solids) is a Johnson solid: the square cupola.

Gluing two of these together gets you a square bicupola. In fact, it gets you two, depending on how you align the halves.

Likewise, the hat of a rhombicosidodecahedron is a pentagonal cupola (one of the Johnson solids I can’t make properly – by now you know why). Connecting two of them with a ring of triangles (setting them out of phase à la antiprism), gives you this:

Let’s have one more example. Chopping in half an icosidodecahedron (another of the Archimedean solids) gets you two (decagon-requiring  and therefore not pictured) pentagonal rotundas. Giving one of these halves a twist, and then gluing them back together with a ring of squares in between gives you:

You get the idea! So, are any of the Johnson solids space-fillers? Just one: the gyrobisfastigium. But actually, even this is a bit of a cheat. The gyrobifastigium is built from two triangular prisms joined with a twist, so the gyrated triangular prismatic honeycomb (pictured above) can be re-imagined as constructed from these instead of prisms. Sadly, there are no genuinely new honeycombs built from Johnson solids.

Beauty is often held to be closely related to symmetry. By definition, Johnson solids can’t have the high level of symmetry of the uniform shapes we met earlier. But let no-one say that makes them ugly! For one thing, there is still room for symmetry of the traditional reflectional or rotational variety. Surprisingly (at least to me), all of the Johnson solids exhibit some symmetry of this kind. How much varies considerably, but it supports my view that many of these shapes are really quite beautiful. The most intriguing are the elementary Johnson solids, those not obtained by chopping or gluing uniform solids using the sorts of techniques described above. For instance: 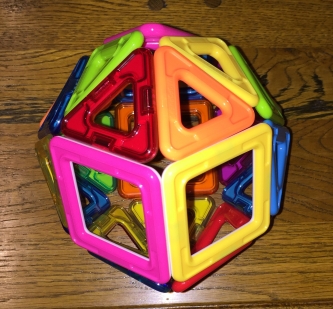 But my favourite of all is the last of the 92:

A triangular hebesphenorotunda (viewed from above) 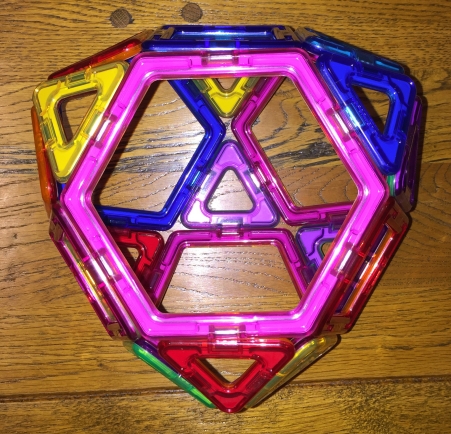 A triangular hebesphenorotunda (viewed from below)

This shape is elementary: it cannot be broken down into smaller regular polygonal convex solids. It has attractive three-fold rotational and vertical reflectional symmetry, but also a touch of the spectacular: it’s the only one of any the polyhedra discussed in this post which requires triangles, squares, pentagons, and hexagons.

I hope you enjoyed this quick tour of the Johnson solids! But where does the newly enthusiastic magformist go from here? Answer, they begin building non-convex polyhedra – and that’s when the fun really starts! A follow-up blog-post is on its way.

In the meantime – hopefully it’s obvious by now – but let me say this: I like Magformers a lot. What I enjoy most is not just that you can make all these wonderful shapes (there are numerous ways of doing that, from origami to 3d-printing) but that you can do it incredibly quickly and easily. You can knock up a dodecahedron in 30 seconds, an icosidodecahedron in a minute, and a rhombicosidodecahedron in two. So, even in a short amount of time, you can lose yourself in a lovely world of geometry.

[Update: the sequel to this post is now online – Magforming the Stewart Toroids]

15 comments on “Magforming the Johnson Solids”