The Wit & Wisdom of Rolf Heuer 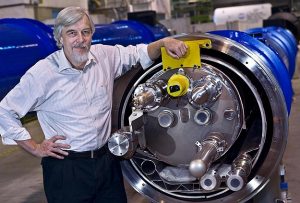 Like many others I’ve spent the morning watching the CERN seminar & press-conference on the announcement of the discovery of a Higgs-like boson. I have nothing to add to the huge amount of coverage of the physics itself, but I do want to note what an excellent job CERN’s director general Rolf Heuer has done in communicating these subtle & difficult issues, with clarity, enthusiasm, and humour.

In particular, here are three delightful metaphors he used during this morning’s press conference. (Questions and answers are all paraphrased by me.)

1. So have they found the Higgs boson or not?

Heuer likened the situation to seeing someone from far away. Imagine that you expect your best friend to emerge from over a distant hill at a certain time. Sure enough, a figure appears roughly when and where expected. That is the situation we are in now, following the latest round of data-crunching. But is it really the right person? Or could it be his twin brother? Or someone else altogether? These are the questions for which we need more data.

2. How does the Higgs mechanism give other particles mass?

Brilliantly, Heuer compared the Higgs field to a room full of journalists. Massless particles are like unknown members of the public, who can move through the room uninhibited. Massive particles, meanwhile, are celebrities; the more famous they are, the more journalists will gather round them, and the slower they will travel. (He drily observed that Peter Higgs was “very heavy” this morning.) Without these all-important ‘journalists’ to slow them down, other particles would travel at the speed of light.

That’s the Higgs field, but what of the boson? Heuer likened this to opening the door to the press room and whispering a rumour. Journalists will come together in clusters, as they try to find out what the buzz is. Those small crowds of journalists are the Higgs particles.

3. Why should we fund CERN rather than developing more practical new technologies?

Heuer spoke of a virtuous circle, connecting fundamental science to more applied research, noting that the feats of engineering which allowed this latest discovery required many significant technological breakthroughs.

He likened the situation to someone with a sack of corn. Should he eat it all? Or plant it all? In either case, he will starve sooner or later. The answer is he should eat some and plant some; the delicate judgement is in finding the right balance.

One comment on “The Wit & Wisdom of Rolf Heuer”